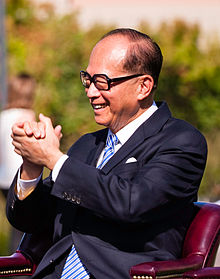 Li Ka-shing’s son Victor has a lot to live up to. Here’s how he, and any successor to a family business, can make a success of keeping it in the family

Li Ka-shing made headlines around the world last week by announcing his retirement, finally putting an end to a storied 70-year career.

Li famously grew up in humble surrounds and began his entrepreneurial journey selling plastic flowers, before rising to become Hong Kong’s wealthiest tycoon worth an estimated US$34.9 billion.

The 89-year-old tycoon announced he would hand over his two businesses, CK Hutchison Holdings and CK Asset Holdings, to his oldest son Victor Li.

The announcement was not unexpected. Li had already said publicly that Victor would take control of the two companies. In a way, it had been ordained since the day he was born.

“In the traditional Chinese way of doing things, control of the business is always passed on to the first-born son,” says Roger King, an adjunct professor of finance at HKUST and founding director of the Tanoto Centre for Asian Family Business and Entrepreneurship Studies.

But according to Professor King, first-born children don’t always make the strongest successors. “First-borns are typically very obedient and structured because parents tend to spend a lot of time with them; they usually do well scholastically, but one of their shortcomings, especially among sons, is they are risk-averse. They don’t want to take chances. Most successful entrepreneurs are not first-born. A lot of them tend to be last-born, because they’re usually given more freedom to do what they want.”

In a bid to help tycoons choose the most suitable successor for their family business, Professor King developed a model called CCKP—“commitment”, “confidence”, “knowledge” and “passion”. Those who possess these qualities, says Professor King, are most likely to make a successful successor. Here’s why.

Many in this generation are educated abroad, so their perspective is very different from the traditional Chinese way of doing things. This is one of the major challenges facing family-owned businesses. The younger generation are under a lot of pressure—they think they should take over the family business, but they have their own interests. Whatever the case, they need to be truly committed to the business to succeed.”

“The second attribute relates to self-confidence. As life expectancy increases, the older generation is around longer to observe how the successor runs the business. They usually continue to go to the office and are prone to criticise their child, never really letting go and ultimately micro-managing. If the successor is being told every day that whatever they do they’re not doing it properly, it’s easy to lose self-confidence

Li Ka-shing is resigning from his position but staying on as a senior advisor. What does that mean? Is he really letting go or not? Will he really give Victor the opportunity to develop his ideas and move the businesses in the direction he wants to take them?”

“Business lifecycles keep getting shorter because of the number of disruptors out there. Today, it’s not just knowing what your existing business is all about, you also have to think how the disruptors in the industry are going to change your entire business model. You need a successor who knows enough to think beyond the next few years. The next generation has to understand the industry, where it’s going and what the business will look like 5-15 years from now. They need to have knowledge and a clear vision.”

“Some people think passion and commitment are the same, but they’re quite different. You can be committed without having passion. In Mainland China, there’s currently a big transition from first to second generation-run family businesses. Shanghai Jiao Tong University did a survey of family-owned businesses and reported that close to 80 percent of the next generation didn’t want to join their family’s business. Part of the reason is most wanted to start their own business; they thought the family business was of the past. This is perhaps because many family-owned businesses are in sunset industries, and not seen as very sexy or exciting. They see the Pony Mas and the Jack Mas of this world and that’s what they want to do. If you’re going to successfully take over the family firm, you need passion for that business.”