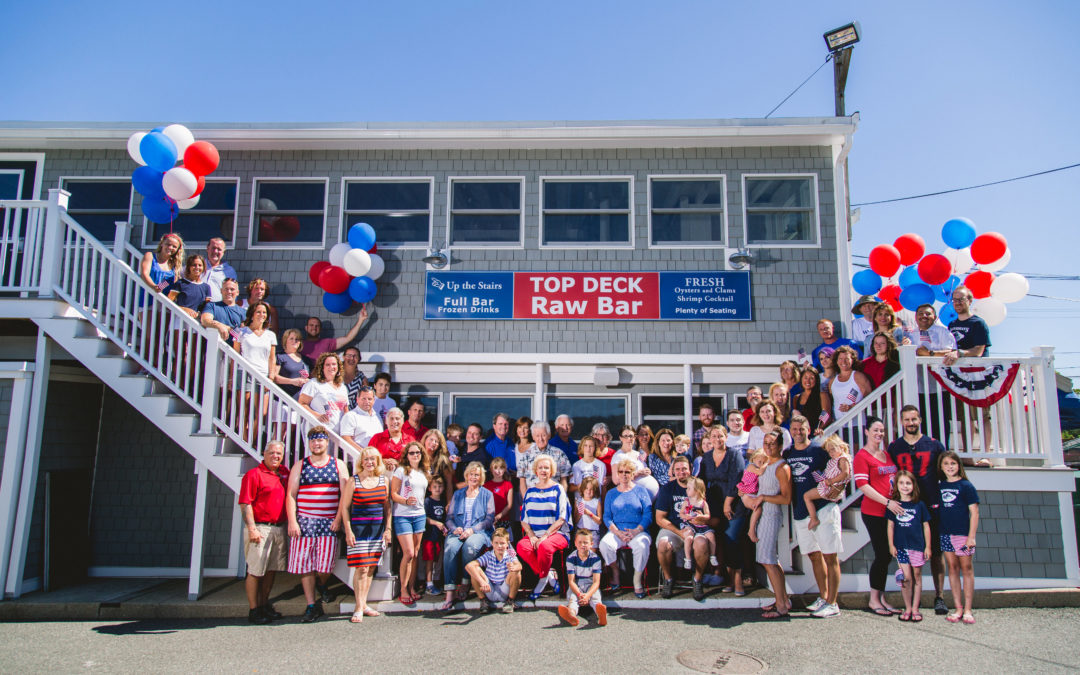 Steeped in tradition, originality and award-winning taste, Woodman’s of Essex holds one major claim to fame above the rest – inventor of the fried clam.

Woodman’s began as a roadside stand in 1914, selling small grocery items, homemade potato chips and clams. On July 3, 1916, original owners Lawrence “Chubby” and Bessie Woodman took what was considered a facetious suggestion from a local fisherman to fry up a few clams into an experiment. Wondering if the finished product was palatable enough to become profitable, the pair brought fried clams to the town parade to test their luck – and it turned out they were a big hit. 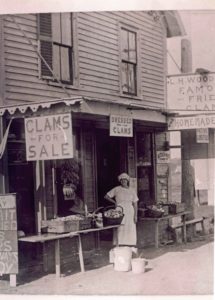 Bessie Woodman in an undated photo outside the original road stand. Photo courtesy of the Woodman family.

Over 100 years and five generations later, Woodman’s continues to fry clams where it all began. “Having a product that came to fruition over 100 years ago that my grandfather did, it kind of makes you proud,” said Stephen Woodman, third generation, Woodman’s CEO.

“One of the things that the family strives for is to keep the old new again. We’re constantly trying to reinvent ourselves without changing,” said Maureen Woodman, third generation, director of catering sales at Woodman’s of Essex.

The restaurant prides itself on being family-friendly, both for the elderly and infants. For many, it has been a long-standing family tradition to come together. “The experience has not changed. You know when you go there that the feeling and the taste and the smell is going to be exactly what you had as a child,” Maureen said. “It’s unchanged in an ever-changing world – people are looking for that right now. The Millennials love that, their grandparents tell them about this clam shack and it’s exactly as they told them. It gives them a comfy feeling; you feel safe.”

The Woodmans have also been using a social media push to interact with the restaurant’s new generation of followers, and enjoy seeing their visitors’ experience through a different medium.

The restaurant’s original gluten-free menu has also kept the crowds coming with the rise of Celiac’s disease in recent years and the emergence of the gluten-free diet. Woodman’s menu items are made with corn flour, making them more easily digestible than their wheat counterpart. “I think the food is current because you just don’t cook this food at home still,” she said.

Both the restaurant’s location and cuisine have been earning Woodman’s quite a bit of attention. The restaurant has appeared in numerous movies, including “Grown Ups,” “The Proposal,” “Manchester by the Sea,” “The Crucible,” “Love Letters” and the TV show “The Devil You Know.” Woodman’s has also appeared on the Travel Channel’s “Food Paradise” and on various Food Network programs, and has received a slew of recognitions too lengthy to tally. Among those, Woodman’s ranked number four in the country for its clam roll and lobster roll. 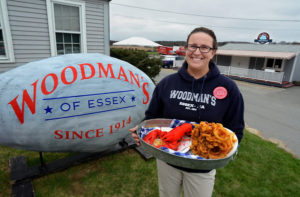 Kristi Woodman, fifth generation, with some of the restaurant’s menu items.

There are currently three working generations at Woodman’s; the youngest is 14, and the oldest is 79. They’ve all grown up around the family business that has become something of a legacy. “I think when you’re younger, you want to do stuff, but as you age you realize the people who come before you have more wisdom,” Maureen said.

“I can see my grandkids … like to come down and just be here and they love to work. They love to do things and they want to be with their dad or papa, and that’s probably what it was like when I was young, too,” Stephen said. “I worked every morning with my dad, besides going to school. That’s the way it was. And that was fabulous, that was great to be able to have a such a great relationship with your dad. And be able to work with him every day, so I had a great time.”

With a family-run business that has weathered the storm both economically and meteorologically for many years, the key can be pulling together.  “The trust level is amazing, you share everything together. We really made a decision that we’re a family first and a business second,” Maureen said. “We share each other’s successes and tragedies, we’re there for each other and we have each other’s back.”

The Woodman family is also passionate about giving back to the community, in more recent years setting up a scholarship fund to commemorate the generosity of the late Dexter and Gini Woodman. Since the program’s inception in 1987, $701,500 in scholarships have been distributed to 126 local students.