William England Lived a Life of Gratitude, for His Family and the Utah-Based Trucking Company He Helped Build 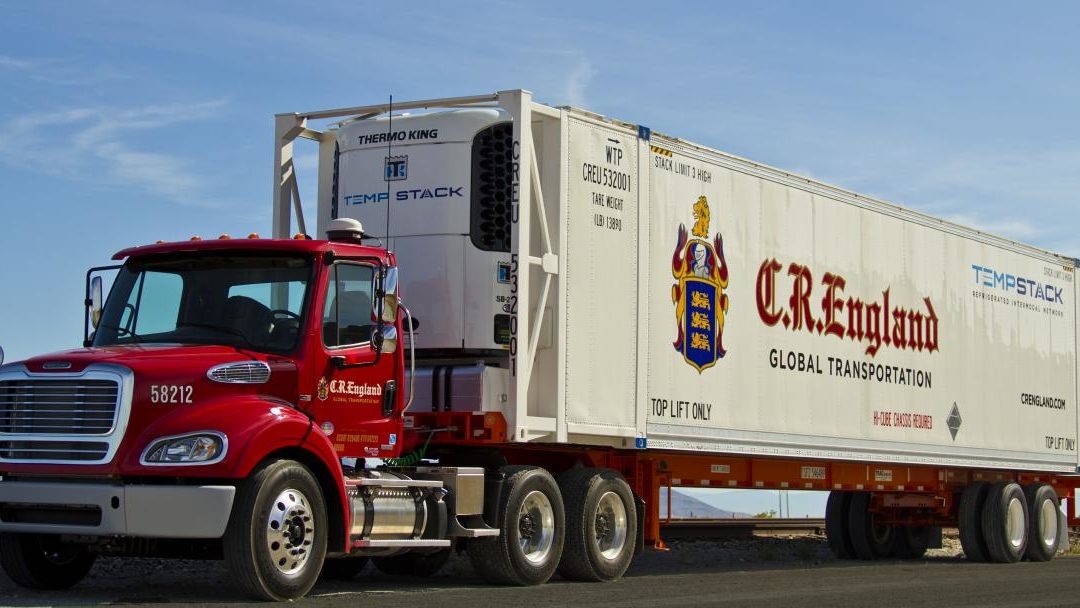 (by Paighten Harkins for the Salt Lake Tribune)

William “Bill” England got his start in the trucking business, hauling goods between northern Utah and Idaho, when he was barely a teenager.

England’s dad, Chester, strapped blocks to the brake and accelerator so his son could reach the pedals to drive, so the story goes, according to Sandra Okland, England’s daughter.

Over the years, England and his brother, Gene, added more trucks to the fleet, and as of Wednesday, when England died at 95-years-old, the Utah-based trucking company he helped build had grown to become one of the largest in the United States.

Whenever Okland, 71, is driving down the highway and sees one of the big, red C.R. England refrigerated semitrucks, she said she feels an enormous sense of pride for what her father and family accomplished.

“You’re just so proud of the part my father played in it, and now that it’s gone on to the next generation, and they’re as good or better than the first generation,” Okland said, choking up. “A lot of pride. A lot of family love.”

Dan England, Bill England’s nephew and chairman of C.R. England, said Saturday that his uncle’s optimism was his greatest attribute.

England, who had diabetes that resulted in him going blind in the last decade of his life, never lost his enthusiasm, Okland said.

“He was always up and happy. He never used [his blindness] as an excuse to be unhappy or not be able to accomplish something,” Okland said.

As he looked back over his 95 years, Okland said, her father was grateful for everything life gave him, the good and the bad.
According to his obituary, in the days before he died, he asked, “How could life be any better than this?”

Chester England founded C.R. England in 1920 in Plain City with a Model T pickup. Once Chester England’s sons, Bill and Gene, returned from World War II, the brothers expanded to a fleet of trucks, according to the company’s website. By 1980, the business owned about 180 trucks.

Now, with the fourth generation leading C.R. England, it ships goods across the country and in and out of Mexico.

Bill England retired about 2005, when his brother’s side of the family bought him out. Gene, who is 98, still comes into work a few times a week, Dan England said.

It’s almost unheard of for a business to remain family-owned and -operated for as long as it has, Dan England said.

Part of the reason it’s worked, he said: “Our family members aren’t always trying to get the very last dime they can. The relationship is of such importance to everybody that they’re willing to compromise and give and do what works.”

Although Bill England loved the business, he loved his family more, Dan England said. Bill England always made sure to put his family first. While he always worked hard (and spent a lot of time away from his wife and children when the business started), England never let it interfere with his family life.

Okland said her father would try anything, especially when it came to his children and grandchildren. He always clicked with children, she said, adding it was probably because “he was just a kid himself.”

Once, sometime around the 1950s, England went out and bought himself skateboard. Okland remembers looking out the window as a teenager and watching her father skate with the neighborhood kids and being embarrassed.

“But now I think, ‘Wow. Wasn’t that great he did that?’” she said, adding that he was so eager to try something new just so he could hang out with the kids.

England was always active, she said. He particularly loved water and snow skiing.

“He would always ski on the very edge of disaster,” Dan England said. Despite that, Dan England said — after a few seconds of deliberation — that his uncle was probably a better skier than his own father, Gene.

Skiing prowess aside, Dan England said Bill and Gene were very close, “almost joined at the hip.” In addition to growing and running C.R. England together, for years they’d buy nearly identical cars. Once, both had Buick Roadmasters. Another time, they drove Ford Fairlanes.

“You know, a lot of years, they’d even get the same color,” he said.

Okland said her father had been in poor health in the last part of his life, battling blindness and the diabetes that had given him trouble since he was diagnosed at 19.

If not for Bill England’s wife, Fern, Okland thinks he might have died sooner. Not only because Fern saved him multiple times from insulin shock as he slept but also because he was completely devoted to her.

“He’s 95 years old,” Okland said, “and I think that’s what took him so long to leave: He didn’t want to leave my mother.”

Bill England is survived by his wife, Fern, and their three children, Sandra Okland, Debbie Nelson and Robin Cannon. He has 16 grandchildren and 39 great-grandchildren, according to his obituary.