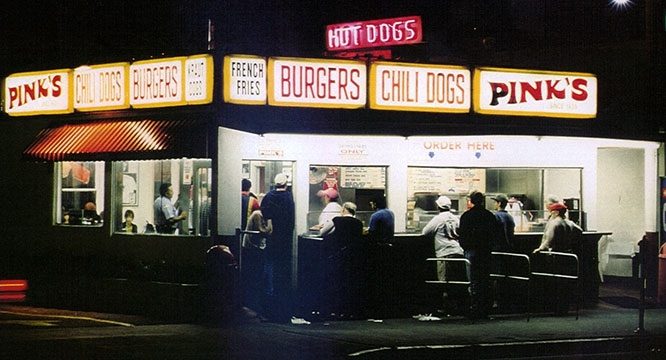 Pinks in the 1990s, the legend continues 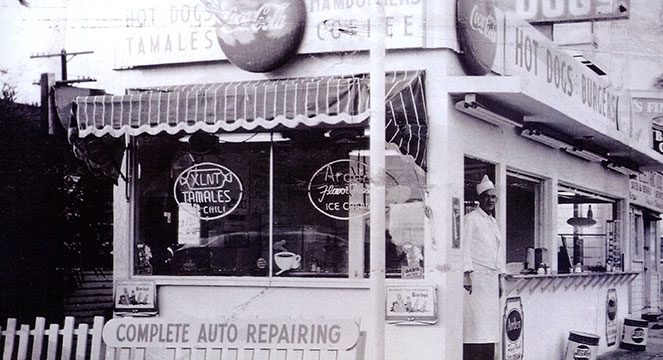 By 1946, Pinks had taken on a more permanent look. 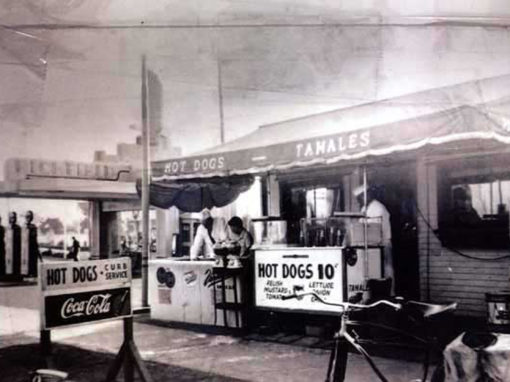 Things were a little more serious in 1941 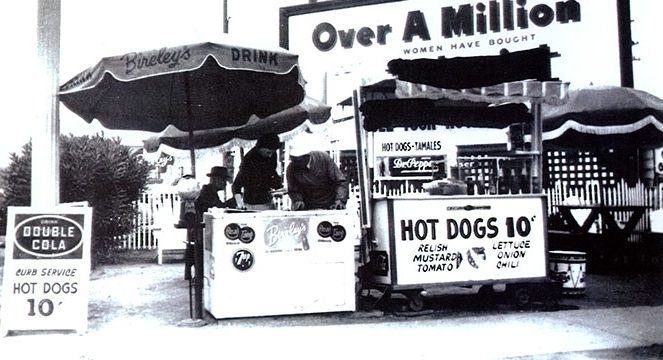 The Original Pink’s Perambulator Cart in 1939 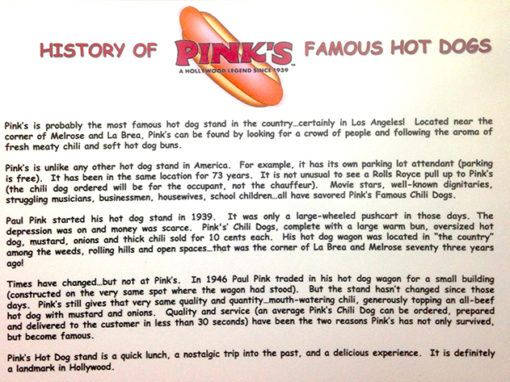 A Hollywood Legend Since 1939. 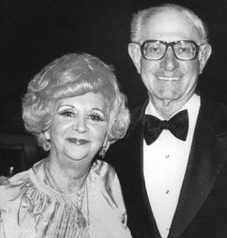 Pink’s Hot Dogs, Inc., a 77-year-old landmark hot dog stand located in Hollywood, serves over 2000 hot dogs and 200 hamburgers a day. Pink’s was started in 1939 by Richard’s parents, Paul and Betty Pink, with a pushcart they purchased for $50, which money they borrowed from Betty’s mother. The land on which the pushcart stood was leased by Paul and Betty for $15 per month. Hot dogs at that time were 10 cents and cokes were a nickel. Pink’s offered curb service, and was lucky to sell 100 hot dogs a day.

In 1941, the landlord raised their rent from $15 to $25 per month, a 67% increase, and Paul and Betty were forced to either give up or find a way to acquire the property. Paul and Betty, with little collateral but lots of conviction in the potential success of their hot dog stand, convinced Bank of America to loan them $4,000 to purchase the land, which fortunately the landlord was willing to sell. They added a cover to the pushcart, allowing them to also grill hamburgers, and it remained until 1946. The menu was simple: A chili dog and a hamburger. The price of the hot dog in 1946 was 25 cents.

At that time, Paul and Betty scraped together enough savings to build the small hot dog stand building that sits near the corner of La Brea and Melrose today. The location included parking for about 25 cars and eventually the indoor and patio seating expanded to accommodate 80 customers.

Paul & Betty also were raising two children, Beverly and Richard. In order to afford living expenses, it was necessary for Paul and Betty to find another source of income so they opened in 1958 a flower store next door to Pink’s Hot Dog stand. The flower store thrived for 10 years due to the talent of Betty in the design of flower arrangements, which she learned working part time for her brother, a florist, while she was also running Pink’s with Paul.

Paul and Betty operated the hot dog stand, starting with 4 employees and expanding over time to 10 and 20 and now Pink’s has a staff of about 30 employees. In 1985 at the age of 73 and 75, Paul and Betty retired. At that point, Richard, his wife, Gloria, and sister, Beverly, took over the operation of Pink’s. Since that time, the family has created over 35 combinations of hot dogs and a dozen varieties of hamburgers to satisfy the variety of tastes of its patrons. Pink’s, located near major Hollywood studios like Paramount, Universal and Disney started to attract upcoming and established movie and TV stars. Pink’s celebrity wall of fame in the dining room started as a place for aspiring actors to hang their photos to be discovered by producers and directors who were known to dine at Pink’s. Today, Pink’s dining room is filled with over 200 photos of celebrities with signed endorsements of their enjoyment of Pinks Hot Dogs.

Due to Pink’s unique menu, its historic age for an LA restaurant (77 years) and its celebrity patrons, it has now been featured in movies, TV shows, the food channel, the travel channel and travel books. As the Pink’s name grew, large restaurant operators came to the family wanting to license the Pink’s name and products in various amusement parks, hotels, arenas and county fairs. Pink’s now has 15 locations including Los Angeles, Las Vegas, San Diego, Ohio, Connecticut, New York, Miami, Hawaii and the Philippines. Pink’s also has an active catering business.

Pinks attributes its longevity and its success to the tastiness of its hot dogs, which snap when you bite into them, its never ending hot dog menu combinations, its loyal long-term staff of over 30, many of whom have been with Pink’s for over ten years, its unique 1946 open kitchen curb side stand and relaxed dining room and patio seating, its Hollywood location and atmosphere, its appearances nationwide in movies and TV and its commitment to the community through its chili dogs for charity program. Pink’s is often referred to as “A Hollywood Legend Since 1939” but the Pink family likes to say “We are the little hot dog stand that could.” 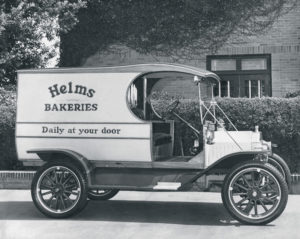 Today a mecca of modern furniture and design, Helms Bakery District was one of the most visible family businesses in Los Angeles. First opening its doors in 1931, family-owned and operated Helms Bakery supplied local residents with its fresh-baked bread delivered “Daily at Your Door” for over four decades. 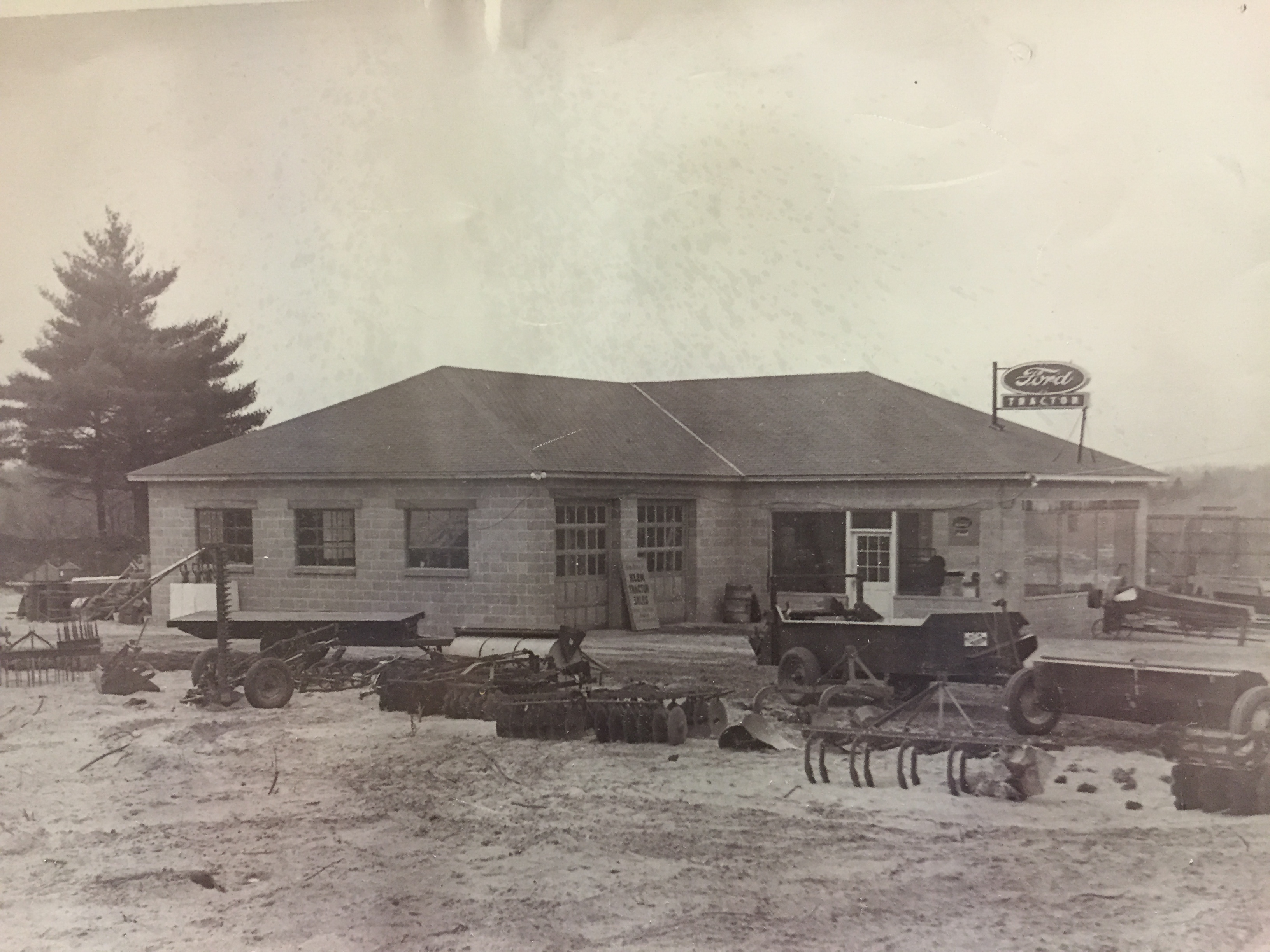 The original store circa 1950s. The store was founded by John Klem as a Ford Tractor dealership. 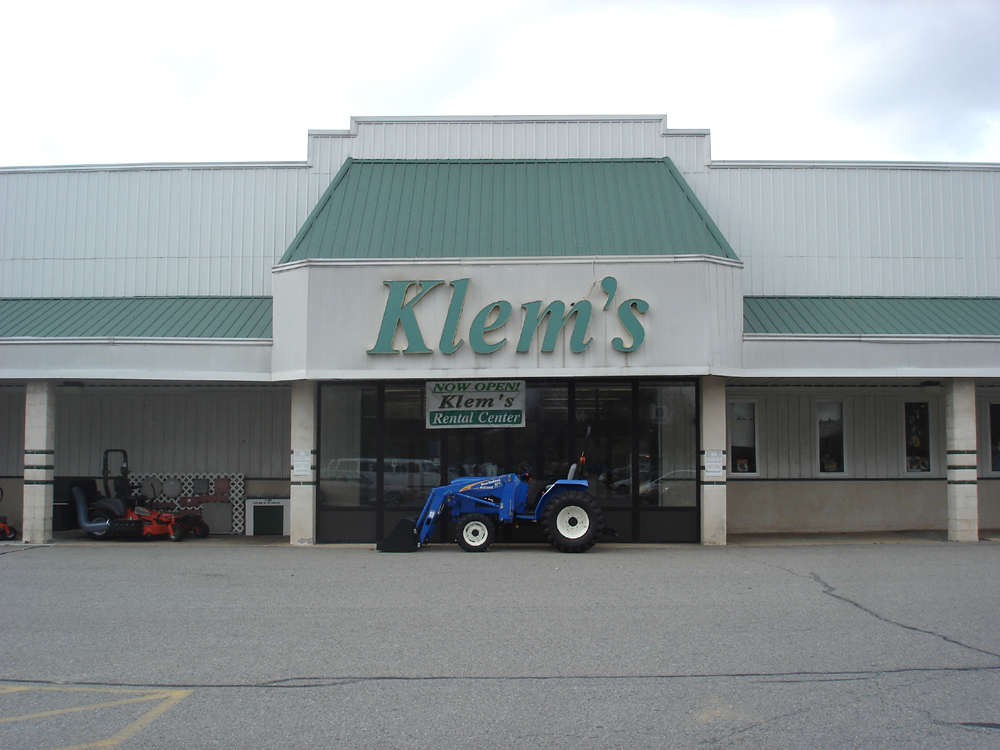 The store as it is today. 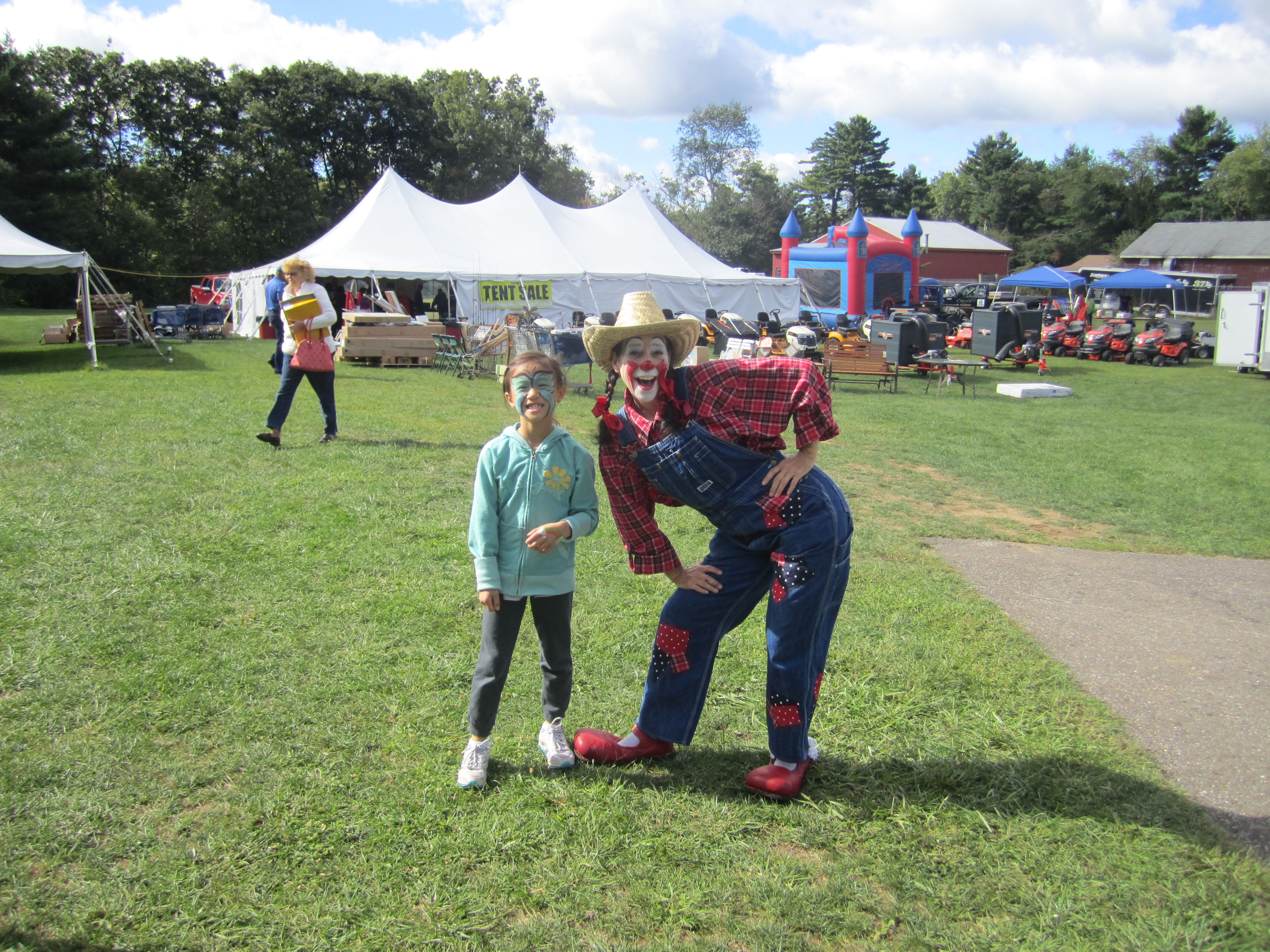 Klem’s has an annual Springfest and Fallfest. The events feature a free bounce house and a very popular tent sale. 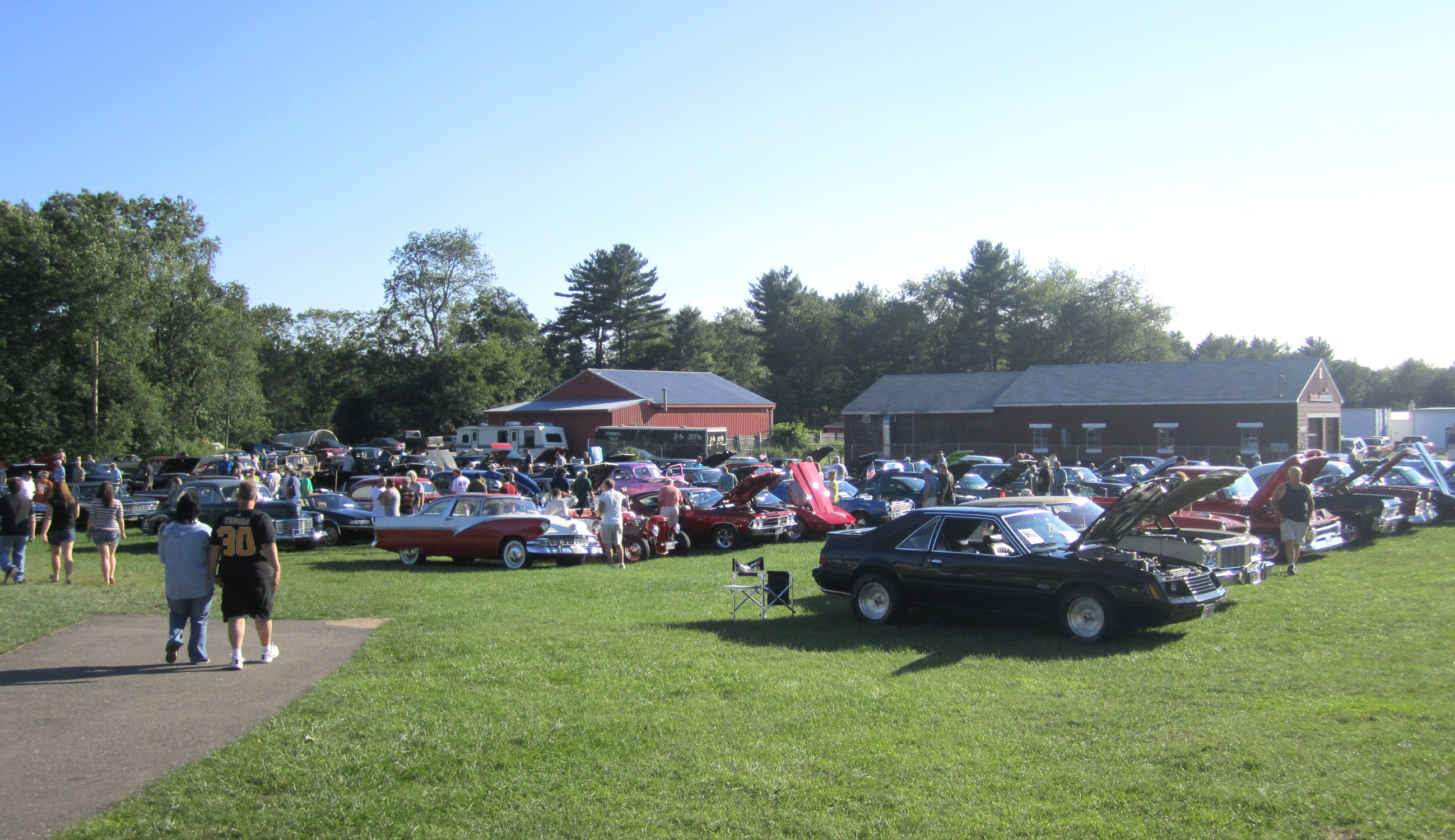 Klem’s hosts Wednesday Night Cruising for Charity during the summer. 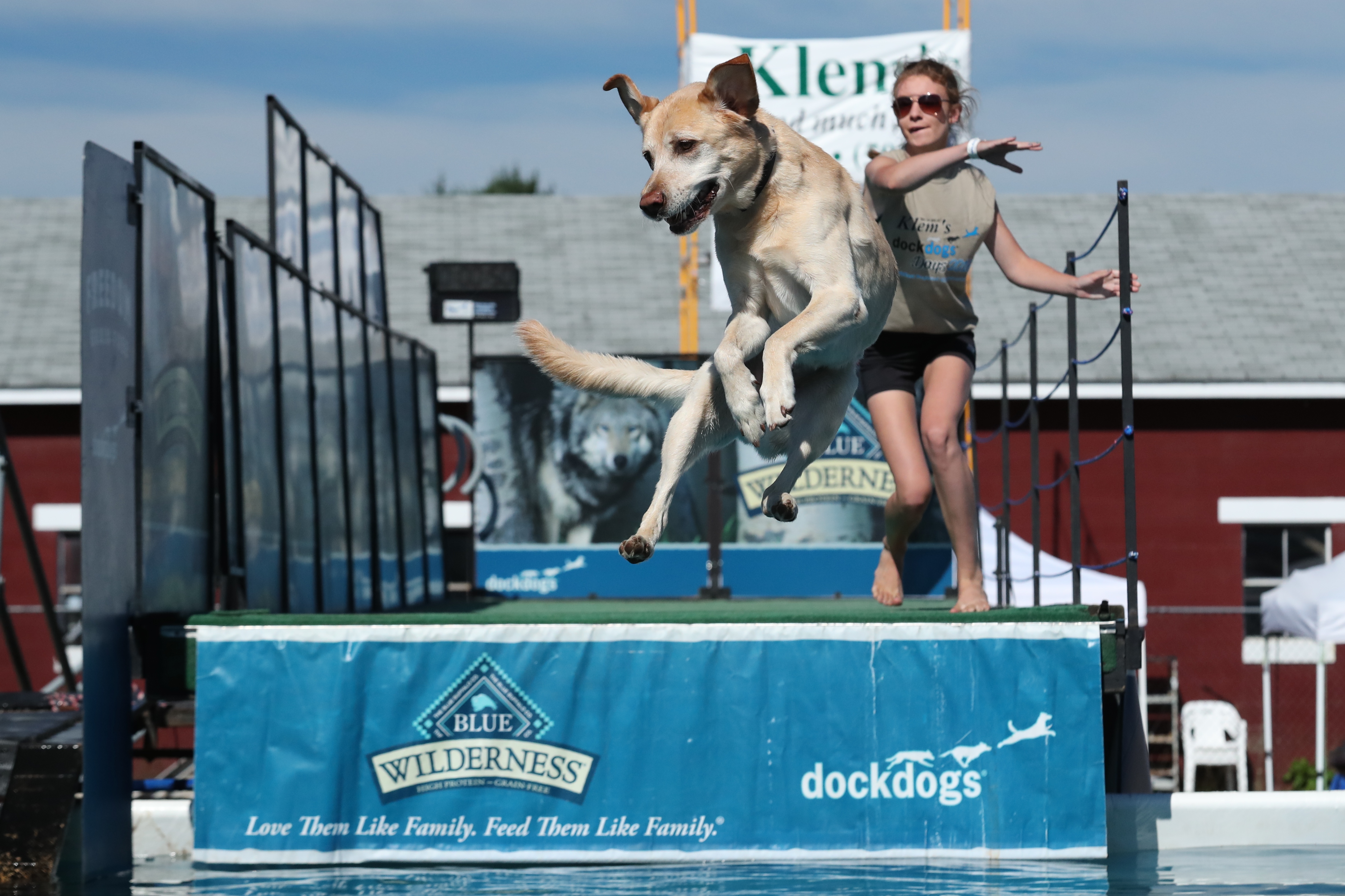 Klem’s hosts Dockdog Days in July. The three-day event draws hundreds of dogs and has almost a dozen participating rescues and non-profits. 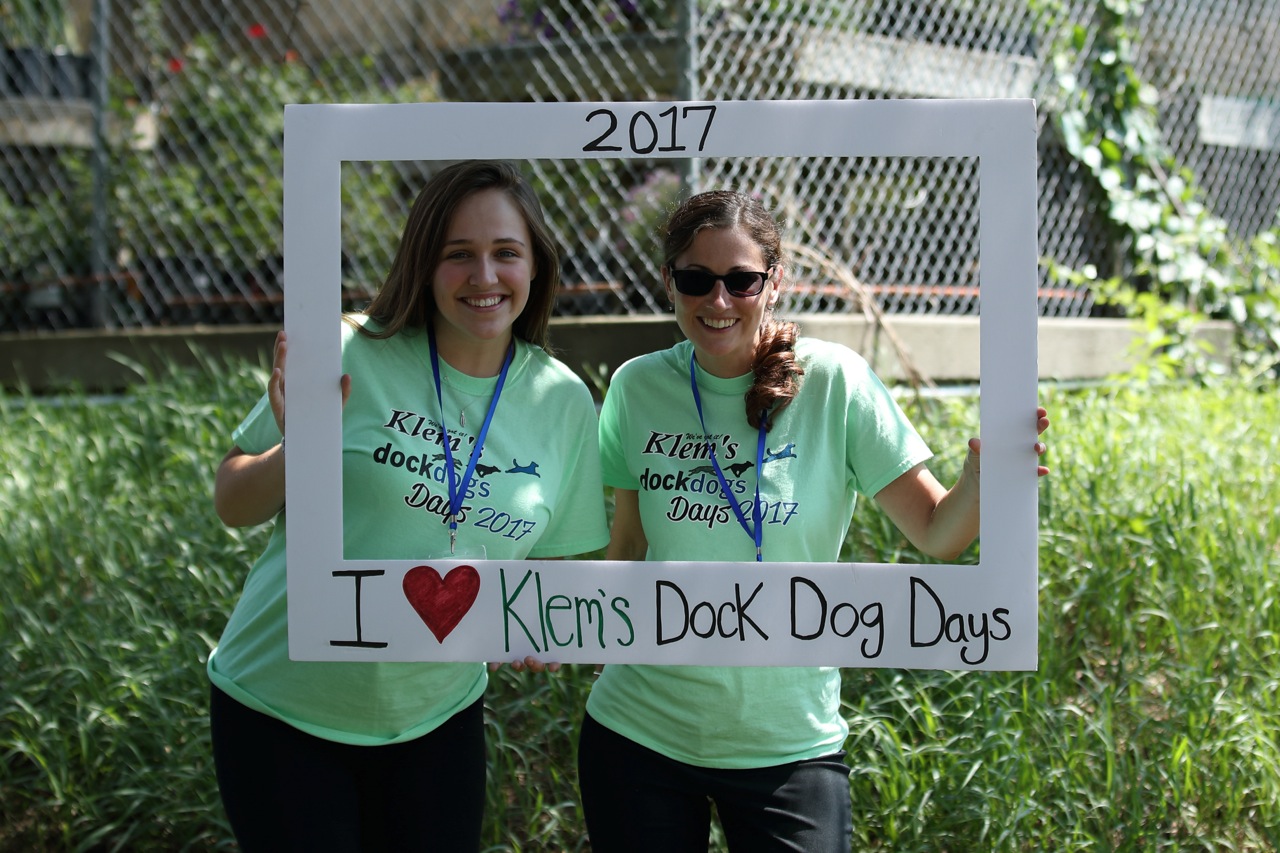 Klem’s staff having some fun at Dockdogs Days. 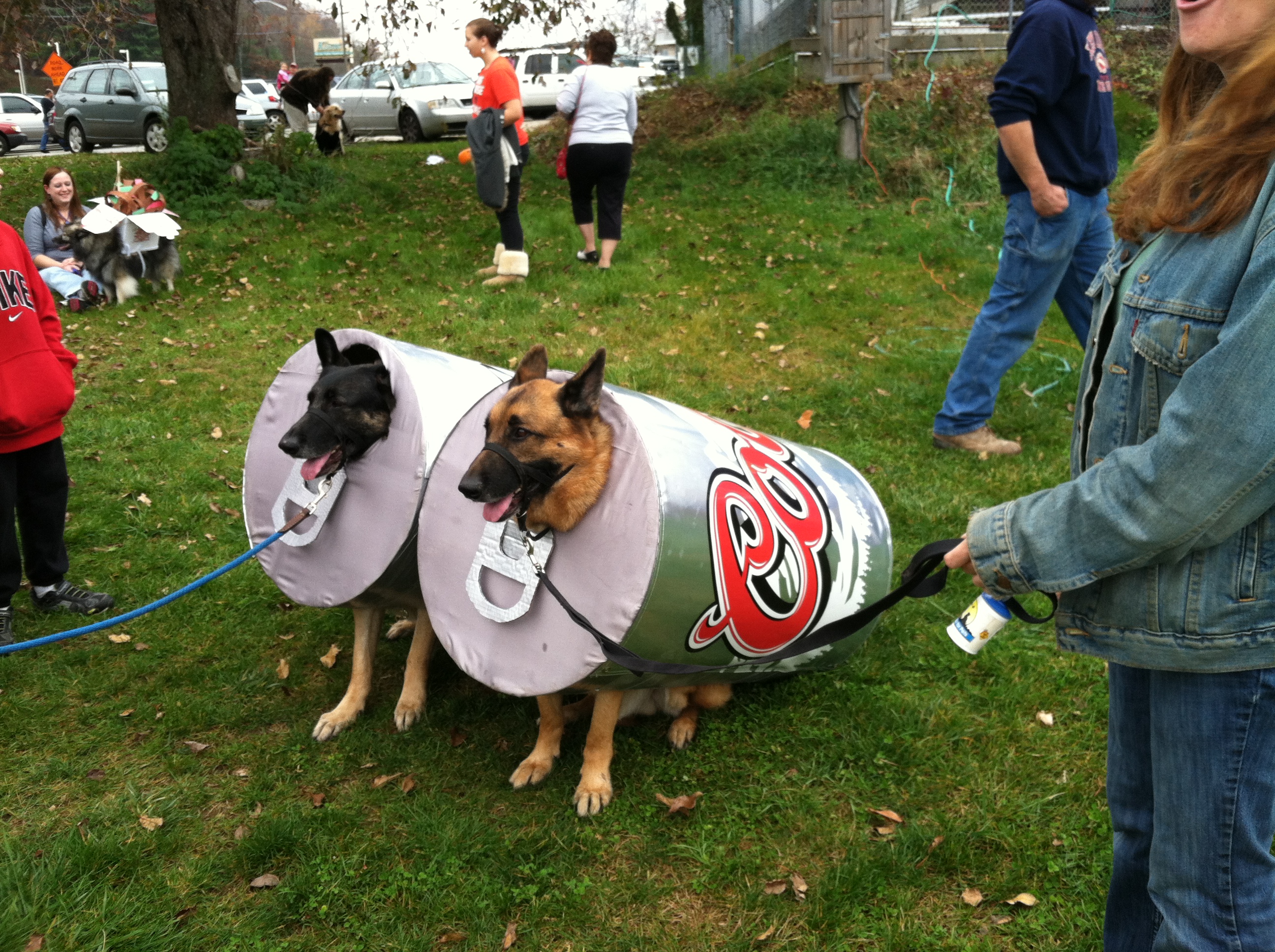 Klem’s hosts an annual Dog Halloween Costume contest that has over 70 dogs in costume. 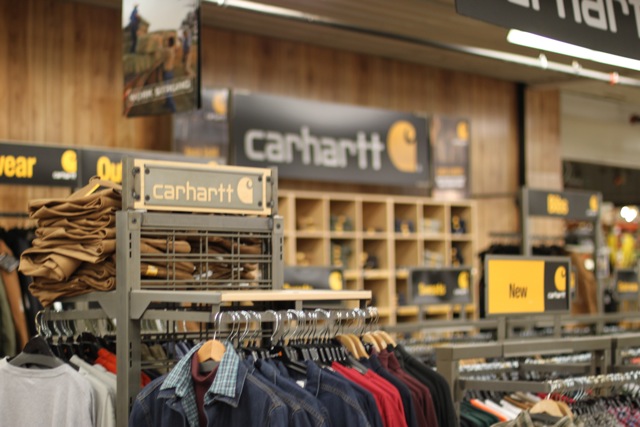 Klem’s is a third-generation family-owned retail store located in Spencer, Massachusetts. Klem’s focuses on quality products, with both national brand names and locally sourced items. Klem’s focuses on a wide variety of events and seminars throughout the year.

Klem's was founded in 1946 by John and Bernice Klem. It began in Hardwick, Massachusetts, as a tractor repair shop. John Klem met Henry Ford in 1947 and purchased a Ford Tractor dealership, moving to its current Route 9 Spencer location. John passed the business to his son Mike Klem in 1979. He expanded the store to include Agway, and expanded again in 1989 to include a greenhouse and Ace Hardware. Then in 1996 with the closure of a local department store, the business again expanded to include housewares, crafts, educational toys and sporting goods. A 20,000-square-foot expansion was completed in 2004. This latest expansion included updating the aquarium system, the air conditioning sytem for the entire building, and adding more space for merchandise and displays. Mike Klem's daughter Jessica Bettencourt was appointed president of the business in 2011.