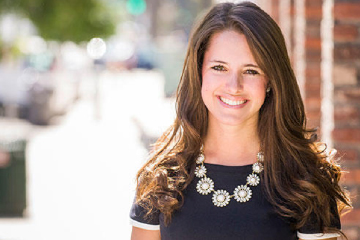 Across the country youthful energy and ideas are helping family businesses — from real estate brokers to bakers of cheese crisps — evolve. Millennials, the official term for people born between 1980 and 2000, are learning from, and teaching, their Baby Boomer parents how to stay relevant now and future-focused with customers of all ages.

Here are the stories of three American entrepreneurs under the age of 34 who were happy to reveal their family recipes for success, and how they are helping to reach this next generation of consumers.

Circle Furniture was founded in Massachusetts by Jessica Tubman’s grandfather 60 years ago. Today, the company boasts six locations in the state. As the director of business development, Jessica is making sure the company’s high-end products have 21st century appeal. The MIT business school graduate joined forces with her father and uncle in 2012 and plunged into revamping the website, entering the world of e-commerce and adjusting the marketing mix to reduce print ads and switch more to online.

And how do her father and uncle feel about that?

They know we need to do it,” Jessica says. “To protect your core business you have to reach out to Millennials on the web. They’re going to be a bigger group than Baby Boomers.”

Staying ahead of the curve, the company is using videos and online advertising to broadcast the value of investing in well-made, long-lasting sofas and cabinets instead of cheap, disposable starter kits from IKEA. Essentially, it’s a re-education process.

“It’s a struggle,” Jessica admits, “but I know how to speak to Millennials.”

For instance, she knows that people of her generation care deeply about things that are American-made and eco-friendly. “We’re more in tune with where and how things are made.” That’s why Circle Furniture lets shoppers know that their wood comes from sustainable forest practices. Says Jessica, “We literally know the people who make your dresser and couch, the woodcrafter in Vermont, the upholsterer in Ohio.”

Another way the Millennial buyer is different from the previous generation, according to Jessica: “We’ve been trained to click and buy and have something show up a couple of days later. But Circle Furniture is custom-made, which means it takes time to complete orders. “People are able to get exactly what they want. If we let them know the work that goes into it, Millennials appreciate that quality takes time.”

After getting a business degree from Indiana University in 2003, Seth Novick did not intend to join his father, Barry, at Kitchen Table Bakers. The company was a start-up, manufacturing savory parmesan crisps from a double oven at Barry’s home in Long Island, N.Y. Instead of joining his father, Seth went abroad to teach English in Prague.

“When I was ready to come back, my dad really needed some help,” recalls Seth, who started out in the kitchen. “I was baking the parmesan crisps in our house and would take a shower and still end up stinking like cheese.” Within a year, to Seth’s relief, a professional baker in Brooklyn took on the role, and Seth was finally able to escape the smell of cheese.

Ten years later, Seth is the vice president of a company that has won several sofi Awards from the Specialty Food Association — a coveted prize that is often likened to the Academy Award of gourmet products. And Seth has used his Millennial status to help grow the company’s product line: Knowing that his fellow Millennials love spicy food, he ushered in Jalapeño Parmesan Crisps, in addition to “Everything” Crisps, which are loaded with onions, poppy seeds, garlic and sesame seeds and are based on the everything bagels Seth has loved since childhood.

But he didn’t stop there: Seth pushed for a stand-up pouch of mini Parmesan crisps, which come in packaging that has a lower carbon footprint than the plastic clamshell his father originally introduced. “We care about the environment,” Seth says of his fellow Millennials, who gravitate toward more informal snack foods. “The mini crisps are something you can grab by the handful and don’t have to set out on a plate.”

Seth and his dad see eye to eye on almost everything except the speed at which business decisions are made. “I want to move twice as fast on things and my dad has a more cautious approach,” he admits. “We meet somewhere in the middle.”

Star Hughes has spent the past four years working as a broker and the director of San Diego’s largest commercial real estate company, Hughes Marino, which happens to be run by her parents. The company represents only tenants, not landlords, giving them a no-conflict niche in the industry.

“We’ve had fast-paced growth,” says Star, noting that the family business has more than doubled in size, from 15 employees to 41, since she came on board. They’ve branched out from San Diego to broker leases all over Southern California. Her work week is often 70 to 80 hours, which she says is common for her generation.

“If it’s a company we love and believe in, Millennials are pumped up and passionate and willing to work incredibly hard,” she says. “There’s less of a line drawn between work and personal life. It all blends together.”

At Hughes Marino, company retreats, which range from staying at a nice resort to getting a box at a baseball game, include significant others and children. “It helps to make everyone feel a part of something much bigger,” explains Star. Her cohesive team often meets for communal breakfasts and lunches in the office’s huge kitchen, and take breaks for games of pool in the sunroom and workout sessions at the in-house gym.

Flexibility in the workplace is key to people her age, she says. “You don’t have to leave. I joke with my parents about putting a cot in my office.” For Star, there is no downside to being in a family-run business where there are open lines of communication. One of her brothers also works for Hughes Marino, as does her boyfriend. “Every single thing in my life ties into this company,” she says. “That’s who I am.”