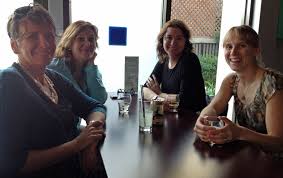 (by Jason Busch for InBusiness Madison)

Seeking to connect with other Madison-area peers in a similar situation, Naomi Kroth, 34, a project manager and vice president of marketing at Bachmann Construction and daughter of company president/CEO Al Bachmann, founded the Millennial Members of Family Business Happy Hour.

“It kind of just rolls right off the tongue,” she jokes of the group’s name. “MMFB? I don’t know, we’ll see if it shortens itself naturally or not. The idea is just to be a group of colleagues or cohorts who are in a similar position at a family business.”

Kroth says the group, which meets quarterly, offers members an informal environment to share experiences and trade ideas. “The idea came from being a member of the Family Business Center at UW–Madison,” Kroth explains. “They put on a lecture series and educational seminars throughout the year, as well as offering a couple networking opportunities for members. I try to go to all of their events, and I just always learn a ton, but I wanted more socializing than they were doing, and specifically to ask others some of the questions that I have are about transitioning or working with your dad or mom as your boss.

“That’s a very specific dynamic and I found myself wanting to ask other members of family businesses these questions, but not really having a venue where it was just those folks,” Kroth continues. “Being selfish and wanting this thing, I just started it. I knew a couple folks my age who were also probably next in line of succession at a family business, so we just set up a happy hour hangout.”

According to Kroth, the group’s first two meetings — the first had six attendees and the second a turnout of 20 younger members of family businesses — have provided some solid opportunities to compare notes with peers and also just socialize.

“Some of the things we’ve talked about are onboarding new technology and just how that plays out when you have generational gaps, and also ownership strategy, specifically stock options and what you do. Do you let lots of people have stock? Do you try to lock it down? Do you keep all of this decision-making power with one person, or do you spread it out evenly? We’ve all had different experiences and seen the generation before have different experiences, so we talked about that at the last meeting. I spoke with a woman about how do you try to ride the economy? It’s going to go up and it’s going to go down, so how do you find good employees, but then how do you keep them without overextending yourself benefits-wise or pay-wise so you can contract again when the economy inevitably contracts again.

“I think a lot of us in family businesses didn’t necessarily go to school for these things,” Kroth notes. “We’re all smart people but I never thought about supply lines or benefit packages [before coming to Bachmann], so you have to start thinking about and learning all of these things. I also got to hear the genesis stories for some of these other family businesses and how the individuals in the group got into them.”

Her own origin story

Kroth didn’t set out to join the family business.

Fresh out of college at UW–Madison, she joined Epic as a project manager, where she stayed for seven years. “That’s a long time at Epic,” Kroth says. “I don’t know what the averages are nowadays but then at two years you were a seasoned project manager. It is still one of the most engaging, fun, and challenging jobs I’ve ever had. The reason I left was because my husband and I decided we wanted to start a family, and the travel requirements for the project management position at Epic just weren’t going to let me be the type of parent I wanted to be.”

Kroth stayed at home for about a year with her son before the call of adult interaction became too much to ignore. Right about that time, she says her father told her he actually needed a project manager to work part-time on just one project. “It was perfect because we were just starting up the project, so it started off at 10 hours per week and even as the project engaged to full-time, it only amounted to about 20 hours a week.”

From there she slowly ramped back up to full-time at the construction company. It wasn’t always a sure thing that she would join the family business, but it was perfect fit.

“My father, if you talked to him about it, would say he felt pressured to join the family business and he didn’t necessarily always like that,” says Kroth. “Whenever he and I talked about it, even when I was little, he always said ‘You’ve got to do something else first.’ That’s always been kind of my dad’s mantra with me and my brothers. It was never an expectation that I would come back and start an actual career here. But I did and it just kind of serendipitously worked out. I had the right skills and I liked doing it.”

In addition to Al Bachmann and Kroth, two other family members are currently part of the company — Kroth’s younger brothers Noah, 32, and David, 28. Both are laborers working on projects for Bachmann in the field, but Kroth doesn’t know if they intend to make the family business their permanent career or if they’ll have other stops on their professional journeys.

Among the reasons she formed the Millennial Members of Family Business group was to hear from others who are just starting the succession process of transitioning the business from one generation to the next.

“My father is just starting to be like, ‘Maybe I do want to be retired in five years,’” explains Kroth. “Looming in my mind is how do I take authority in some areas because that means my dad has to give up authority in those areas. It’ll be weird when we do it because I don’t think he’ll naturally be good at that or that I’ll naturally be inclined to be more like him. We haven’t hit any of those areas yet but we will.”

Knowing other family business members who have started taking those steps — some in very regimented, focused, purposeful, and scheduled ways, and others who take more of a “we’ll just figure it out when we get there” approach — Kroth says it’s good to be able to see the different approaches and ask about the options that are out there from other people her age who are already living through it.

“Coming of age during the recession, watching ourselves and lot of our peers not find work and really struggle to try to dig into that career, and that leading to people having to survive in a gig economy, that really changed the way our generation looks at jobs and careers, and I think it’s for the better,” says Kroth. “It’s no longer like this is what a career looks like. We are asking for flexibility, and I think that’s some of the consternation we hear from the older generation, but I don’t think that’s a bad thing. It’s good that we have a culture and society that wants to like how it works, and I think that’s something the next generation sees, too. You should work to live, not live to work. You’ve got to pay the bills but at the same time it’s okay to try to be critical about where you spend so much of your time.”

To learn more about the Millennial Members of Family Business group, email Kroth at nkroth@bachmannconstruction.net.