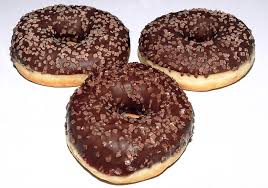 (by Grier Ferguson for Business Observer)

But lines snaking around Peachey’s tent and truck anywhere, really, aren’t an uncommon sight. The promise of doughnuts dripping with glaze and pretzels sprinkled with salt can be hard for fairgoers to resist — even when faced with other options like strawberry shortcake and elephant ears. Long lines form regularly at other events the company attends in Sarasota and Bradenton, too, such as the Phillippi Farmhouse Market in Sarasota.

Peachey’s Baking Co. was founded in 2007. It’s a family affair that’s grown from siblings selling doughnuts at a single festival to a sought-after food stand at well-known national events like the Bonnaroo Music and Arts Festival. Owner Nate Peachey says the company is working on rolling out more doughnut trucks locally. There are also bigger plans for expansion, with interest from potential operators in other states. Company officials decline to disclose annual revenue figures, only to say it’s increased every year.

Field manager Sadie Peachey, Nate Peachey’s sister, says the company aims to maintain its family feel — even with growth potential. With that, they face a conundrum particularly common among growing family enterprises: sustainable expansion without sacrificing the quality and service that made the business successful in the first place.

The Peacheys, including bother Sam Peachey, who recently bought into the business, come from an Amish background long known for its baked goods. They grew up on a farm in North Carolina, where they first honed their baking skills. Today, they use family recipes and make the doughnuts and pretzels themselves, with help from other employees.

During a bad drought that affected their farm, their mother started a bakery at home to help make ends meet called Peachey’s Home Bakery. With eight children in the family, there were lots of hands to help. “Really, we learned everything about baking,” Sadie Peachey says of the cakes, cinnamon rolls and pies they made with their mother.

Today, Sadie, Nate and Sam Peachey’s father is an Amish preacher in the Amish and Mennonite community of Pinecraft in Sarasota. Sadie Peachey practiced some aspects of the Amish life until five years ago.

In Pennsylvania, her Amish grandmother used to make doughnuts and sell them from her house, with people pulling into her driveway on Saturday mornings to get some sweet treats. Sadie Peachey says, “I feel like it’s part of my DNA to bake.”

Growing up, she went to Amish school through eighth grade. In her 20s, she received her GED and took part of a business class. “The way we were raised, you get your basic schooling and you go do it. I think a lot of people get caught up in learning and don’t go do it.”

The origin of Peachey’s Baking Co. goes back to a single festival in 2007 in Tennessee.

From there, the growth was steady. “We grew organically, debt-free,” Nate Peachey says. “We never took on any business loans. We wanted to keep risk low.” He notes, too, the company started during a tough economic time in Florida. “We had this association — if there are hard times, you make food. You market it.”

For a while, they focused on a single product — the glazed doughnut. “Keep things really simple and as low cost as possible — that was our approach,” Nate Peachey says.

During those first years of the business, their mother helped at the stand, traveling with them to markets and other events. Until recently, Peachey’s Baking Co. was known as The Amish Baking Co. The new name pays homage to their mother, Sadie Peachey says. “It’s the same family and the same doughnuts.”

A year or two into the business, Peachey’s added salted and buttered pretzels to its menu. “We realized we needed a savory treat as well,” Sadie Peachey says. “It was something we made at home as well, so it was an easy thing to add.”

In the Sarasota area, Peachey’s operates seasonally. During the fall, the Peachey’s Baking Co. team heads to festivals in North Carolina, near where the siblings grew up. In the summer, it also operates elsewhere because of the heat. “Humidity kills the dough,” Sadie Peachey says. It’s something they learned after trying to make doughnuts in Florida year-round the first year.

During summer months, the Peachey’s team heads to music festivals and other events around the country — Bonnaroo festival in Tennessee and the Electric Forest music festival in Michigan among them. For Bonnaroo, Peachey’s brings 50 friends to help. They serve pretzels and doughnuts to the tens of thousands of festivalgoers. “It’s madness,” Sadie Peachey says.

She’s realized Peachey’s does well at music festivals because of the demographic. “People who go, we find they’re also foodies. They get to see the whole process from dough making to dripping on the rack. They appreciate the homemade, made-from-scratch concept.”

Longer festivals also allow the Peachey siblings more time for their efforts to pay off. Instead of setting up for one afternoon, they can avoid the daily unloading, set-up and reloading processes.

About three-and-a-half years ago, Peachey’s added a truck to its operations at some events, which allows the team to drive up and start serving quicker.

Getting to the point where the company could sell its doughnuts and pretzels at big festivals wasn’t an easy hurdle.

“To get into any larger-scale event, there’s an application process and a screening process,” Nate Peachey says. “So if you don’t have a reputation, it’s pretty much impossible to get a contract with a large successful event. Once we had a bit of a reputation and resume to stand on, we could start getting into larger-scale events.”

Nate Peachey says he applied for three years before Peachey’s got into Bonnaroo. Festival planners liked the company’s resume and that it could provide photographs and video from other events. Images showing lines of people waiting for Peachey’s products at the Florida State Fair in Tampa helped seal the deal.

The music festival first gave Peachey’s a chance in 2011. “Once we had a spot in Bonnaroo, it was pretty easy to pick up more contracts in the music festival industry,” Nate Peachey says. “If one promoter has a vendor they appreciate and does well, promoters from other festivals usually know about it.”

Locally and nationwide, word of mouth has continued to build, Sadie Peachey says, during the more than 11 years the business has been in operation.

Up next? Nate Peachey says the company wants to introduce more doughnut trucks in the Sarasota area as well as around the country. He’s also received interest from people who want to operate a Peachey’s donut truck in other parts of the country.

Nate Peachey says the company aims to introduce franchises within the next three years. “We’re not on a tight timeframe,” he says. “It’s something we’re going to walk into slowly and be able to perfect it.”

While opening up the business to franchisees means it wouldn’t remain all in the family, Nate Peachey says the company will retain its core values. “If we leverage our model, it will just be duplicated,” he says. “It will be the same simple operation made with from-scratch recipes. It won’t all be managed by family members, but it will still have that simple family persona.”