From One Couple to the Next, Office Gallery International Adapts to the Future 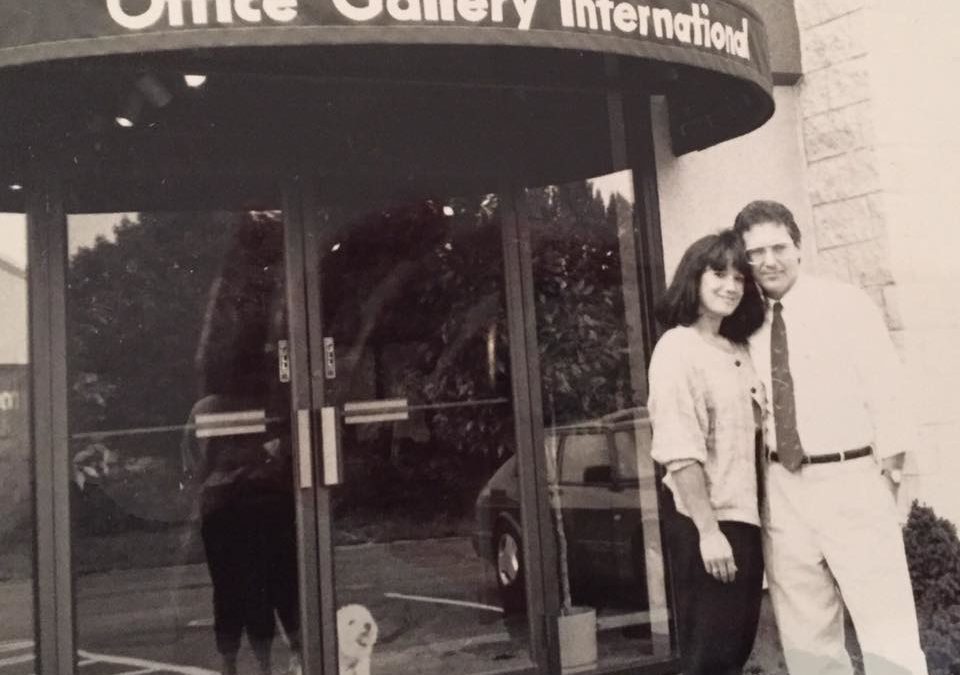 As an idea born out of a previous job at an international furniture design company gone bankrupt, Allen Wluka wanted to try something new. He had experience and knew all of the right people in the industry, so he went to the principal of some of the biggest suppliers in Denmark with a proposal – he wanted to start his own company.

Thus was Office Gallery International born. Founded with his wife, Gwen, and working with his niece, Jordana, Allen grew the office furniture and design company into a family business, later bringing in his good friend and longtime coworker of nearly 35 years, Mike Troia.

“It was one of those beautiful relationships,” Allen said.

Mike’s wife, Hilary, who he had worked with for many years at Macy’s, also jumped onboard.

After riding out the waves of the recession with dedicated employees and patient clients, Allen and Gwen decided it was time to implement an exit strategy as they approached retirement.

“From the onset, when I started with Allen, we had talked about transitioning the business to me eventually,” Mike said.

“I just couldn’t see anyone handling the company the way Mike and Hilary did,” Allen said. 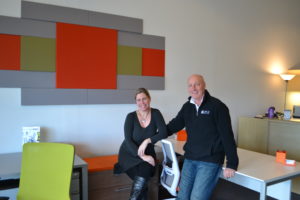 The Wlukas transitioned ownership of the company to Mike and Hilary in July 2016.

“It’s because of that taproot that we have in our friendship that I think enabled us to do this. Because it’s never easy transitioning a business,” Mike said.

Since then, Mike and Hilary have worked to maintain the business’s previously established professional reputation and have also spent time adding their own personal stamp on the company.

“Because we’ve had such a loyal following of customers, we’ve not had to do really any advertising or marketing in the past, and business has been very steady – and it’s still steady. My question has been, ‘Well, if we really did spend some time on marketing and networking and trying to expose ourselves, how well can we do?’ So that’s an experiment that we’re trying right now,” Hilary said.

Mike and Hilary have not only seen the business transition owners, but also its focus. Though the company was initially geared around home office furnishings, the pair noted that the industry is changing. Workers have shifted away from desktop computers to more flexible laptops and tablets, eliminating the need for a traditional, stationary home office space.

“About 50 percent of our customers want a sit-stand desk,” Hilary said, highlighting one in the showroom that acclimates electronically.

As companies change office layouts from cubicles to open floor plans, benching system desks have become increasingly common, so the company has made that option available as well. Mike noted that there can be little privacy in an office with an open floor plan to make personal phone calls, so the company also offers a privacy sofa with built-in outlets on the armrest and a soundproof panel that extends above the chair. 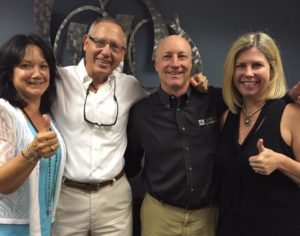 Office Gallery also uses and sells a 65-inch wireless touchscreen computer, mounted on a wheeled stand, to design products for clients through new software that allows them to see custom designs come to life almost instantaneously. The pair noted how interactive and easy the new technology has made the custom design experience for both them and the customer, also highlighting the functionality for corporate clients.

“You can roll it around in your office and have a virtual conference room wherever and [whenever] you want. You can Skype people from all over the country and have everybody talking at the same time,” Hilary said.

The company also does space design planning to help clients determine what pieces will best suit their space and taste. The Troias also emphasized the importance of having a showroom so clients can try out every aspect of their office needs in person – from chairs, to desks, to soundproofing – and see it for themselves.

“We take the sale from start to finish,” Mike said. “We do the design work; it doesn’t go back to a design person in some studio.”

When asked what the key is to maintaining balance in a family business, Hilary said, “First of all, you have to really like each other. We balance each other out in terms of our strengths and our weaknesses.”

“The bottom line is you have to be good friends – we’re good friends as much as we’re partners,” Mike said. “You can’t let things fester – get it out in the open, deal with it and move on.”

Hilary noted that they have a 30-minute debriefing session when they get home, so they can leave the rest of it at work.

“We love what we do, and that helps,” Hilary said.

Tagged with: exit strategy, furniture, outside the family, retirement, transition