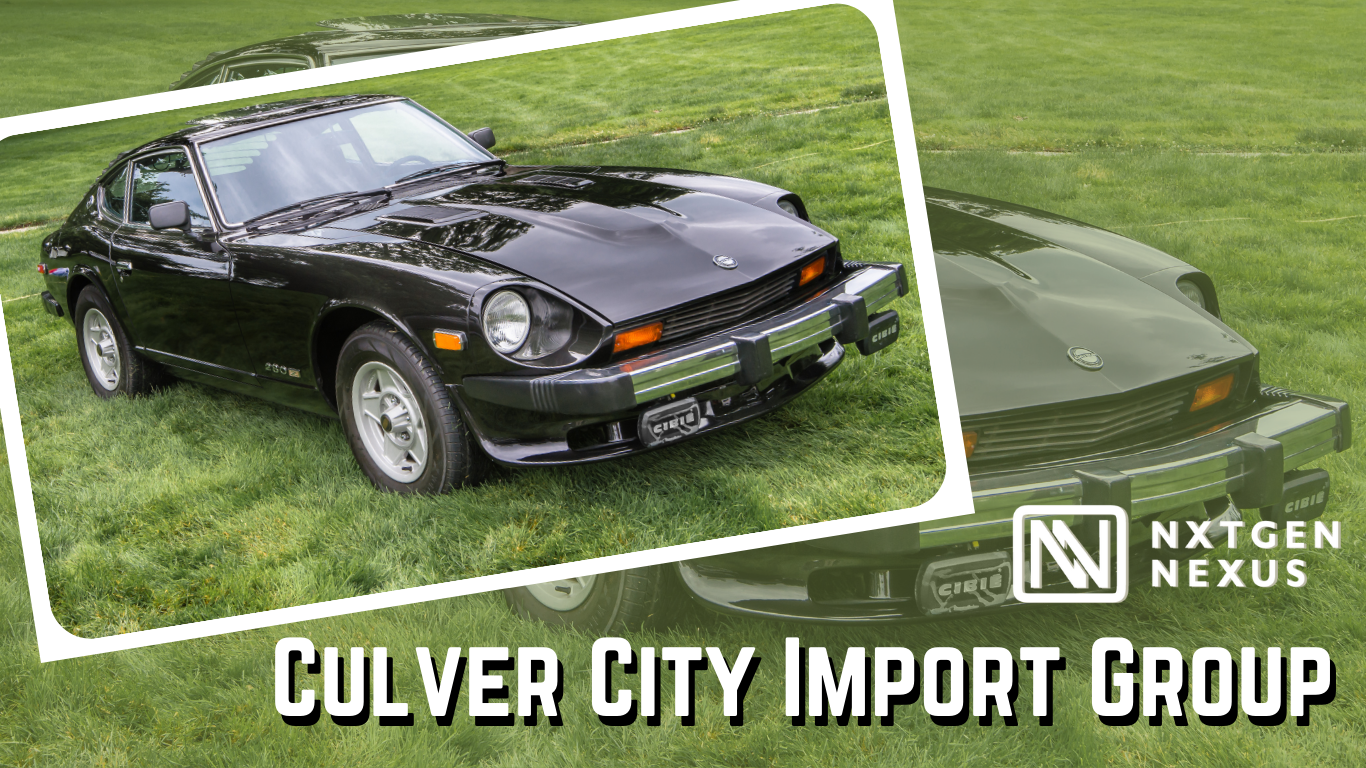 Culver City Import Group started out as my grandfather’s used car lot.  My father joined him in the business.  The lot was located on Figueroa Street in downtown LA which was one of the “car rows” in the city which included Crenshaw Boulevard, Brand Boulevard and Washington Boulevard.  In 1954, they moved to Washington Boulevard in Culver City.  My father’s brother was also in the business but that didn’t work out so my father and grandfather bought him out of the business.  My grandfather retired in 1968 and my father became sole owner.

My father was a hustler and was always looking for a way to make a buck.  In 1968, he bought an existing Datsun (the predecessor to Nissan) franchise in Culver City and relocated the franchise to its long-term location.  His timing was great because it was the beginning of the Japanese car invasion, particularly in California, and the new dealership was very successful.  The business “blew up” with Datsun’s introduction of the 240Z.

We continued to expand the physical plant and acquired the Mazda franchise (late 70s) which was hugely successful due to the RX7.  The Miata came out in 1990 and was a gigantic success and I’m still driving a 2004 Miata.  We also acquired Subaru, Suzuki and Hyundai.  During its peak, we had 150+ employees.

What was your job history in the Family Business?

I started working in the business when I was in high school.  I had a part-time job as a parts runner.  After school, I’d drive a pick-up truck to Gardena where the Datsun parts depo was located.  I’d drive back up and deliver Datsun parts to body shops across town.

I went to college, then law school, and practiced law with a small firm for about five years.  I joined the company in 1983 and my brother was already working there as salesman.  I had a variety of jobs including working on the floor as a salesman, sales manager, and the F&I (Finance and Insurance) desk.  By the mid-1980s, my father left the running of the business to my brother and me and turned his interest to building a mobile home park and other commercial real estate investments.

Was the family business a big part of your life growing up?

Our life revolved around the family business.  My father worked the crazy hours the business required; weekends, nights.  I would do the same years later.  We had access to a rotating array of cars.  You couldn’t get too attached to whatever you were driving because everything was for sale.

Every movie or television show about car dealers features crazy characters working at a car lot.  They weren’t making it up.  There was an everchanging cast of characters and they were a constant subject of dinner table conversation.

There was an entire car lingo which we adopted in our family conversations.  For example, there was no such thing as a car dealership.  It was a car lot.  After the business and grown successful with multiple franchises, if somebody was at one of the dealerships or at the office, we still talked about him being at THE LOT.

Besides getting to drive “free” cars another great perk of the business were the manufacturer’s sales incentive programs.  We traveled to Europe, Japan, Russia, Africa, and multiple Super bowls.  College Football and the NFL teams have car dealer programs where if you gave them a car to drive for a year, you get season tickets and a road trip with the team.  We did that with UCLA and the Raiders.

Why did you leave the car business?

Like many other industries, the car business went through major changes starting in the 1990s.  Manufacturers, known as The Factory, became more and more demanding about how their franchisees conducted their business.  They wanted to turn the industry into McDonald’s, which is completely opposed to the independent, cowboy mentality of the traditional car business entrepreneur.

The car business is a capital-intensive business.  You started getting public companies buying up dealerships.  This gave them a tremendous competitive advantage in every aspect including items such as the classified rates at the LA times.  It became more difficult and less fun, so we left the business in 2005.

To show you how much the business has changed, my brother and I recently went to a Mercedes dealership that is part of one of the large public dealership groups to sell two cars.  When we had our dealerships, the Used Car Manager would drive the car, inspect the car, and he’d give you a number and close the deal on the spot.  It was his decision.  When we met with the Used Car Manager, he looked at the car and didn’t drive it.  Instead, he sent the car’s information back to HQ which was somewhere back East and told us he’d give us a number the following day.  After a nationwide search by HQ, we received a non-negotiable number.  Like many industries, the car business has become very corporate and less fun.

Was there an event that triggered the change from “the kid” to a valued member of the management team?

If there was, it wasn’t overt.  I spent the first couple of years at the F&I desk making sure all the paperwork was complete and the contracts were done correctly.  I’m sure there were some rumblings about my position and there certainly was a learning curve; however, I wasn’t aware of anything.

Were there any siblings that were not involved in the business?

I have a sister who lived the same life of growing up in the car business but didn’t work for the business.  I think part of it was that she didn’t want to work in the business.   The car business in the late 70s and early 80s was a male dominated business.  My sister was never prohibited from going into the business, but she certainly wasn’t encouraged by my father who was pretty old school when it came to women working.

Were there any events you did for the employees to build morale?

We did a couple of different things.  For a number of years, if we had a good month, we’d take all the sales crew to the Palm.  My favorite thing was that every Monday, our Service Director would have a hamburger and hot dog barbeque in the service department.  He didn’t have a real barbeque, he used a jerry rigged 40-gallon drum with a grill on top.

What is your favorite memory from the family business?

We had 150 employees and it was a diverse group of people, a United Nations of backgrounds and ethnicities. That was great.  Even though it can be difficult having employees, they were an important part of our lives.  When things were tight I made sure they received a paycheck even if we didn’t.  When we exited the car business, my biggest concern was their ability to get other employment.  We helped out during that transition.

What’s your advice for NxtGens who are going in the business?

What are you doing today and are you working with family business members?

My brother and I are still working together managing our portfolio of real estate holdings.  My nephew has also started his own real estate development company and we share space in our office building in downtown Culver City.

We helped support my nephew on building the Platform a high-end outdoor shopping, dining and event space where Culver City Import Group use to be.  Things really have come full circle.  That’s what family business is about.