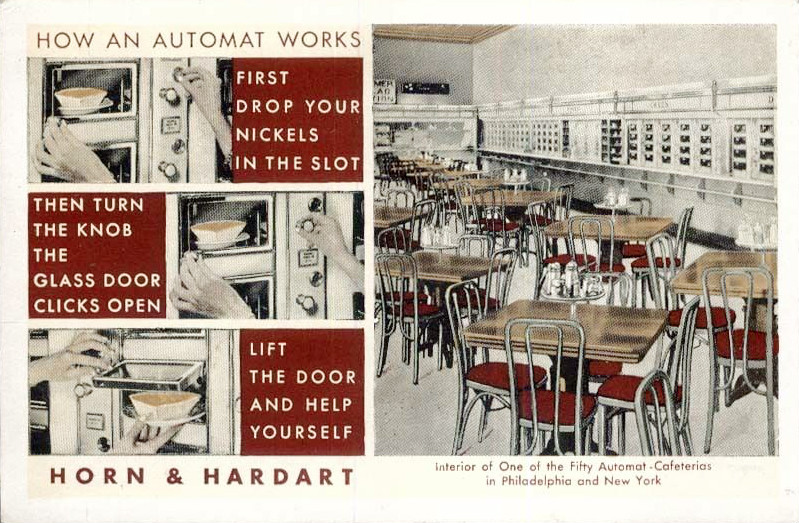 My Dad, Bernard Olcott of Olcott International was married five times, (my mother was wife number 2) so, as you could imagine, not all of them were cooking devotees.

When I was 8 years old in 1966, I would spend a few weeks with my Dad in his office during the summer in the Pan Am building in midtown Manhattan, which I considered to be the height of modernity and futurism.  You could say that this was when I started working in the family business of corporate patent renewals.

Dinner time was a special treat as we had lots of inexpensive choices.  My Dad favored those.  Did yours?

One of them was the great Automat.  Also known under the brand name of Horn & Hardart, this urban chain had reigned supreme as America’s original fast food restaurant. The walls were covered with tiny glass windows displaying Salisbury steak, sandwiches, macaroni & cheese, pudding, or slices of cherry pie, all fed by kitchen staff behind the wall. After inserting either coin or token into the slot and turning the handle, you could raise the window and take out the delicacy.

Our Horn & Hardart was located on 42nd Street in New York so there were plentiful options for a family business and the next-in-line to enjoy.  However, it wasn’t the allure of roast turkey and rice entrée that brought us to the Automat, it was the cost.

And it was cheap….and so was Dad.  Because there were no waitresses and credit cards barely existed, nobody knew my Dad’s names. He was Mr. Incognito. Other guests would have lively conversations with the cashiers – or with themselves (remember that this was before cell phones) – but not Dad.  He had no interest hobnobbing with Automat employees.

For me, being with him and a pocket full of nickels, it was a wonderful occurrence because it was what we did.  Looking back, I realized there was a depression-era patina about the place.  It was never renovated or truly modernized.  I mean, the turkey platter was great.  But the ambience just paled in comparison to the Pan Am Building.

By the mid-1960s, however, the Automats had already been around for 60 years (first one opened in Philadelphia in 1902. New York got its first one ten years later.)  I don’t think they ever bothered to evolve.

After dinner – it was fast, after all – we still had an hour or two to kill before returning back to the Peter Cooper Hotel on 38th and Lex. Remember, in the summer months, the sun doesn’t set in New York until around 8:30 PM.  Our favorite destination before heading home?  Where else would you take an 8 year old biy?  Why the Central Park Zoo!  Besides, the cost was correct.