A Unique (but important) Family Business 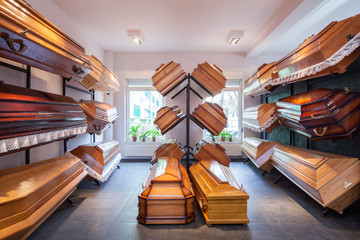 For Jeff Thackeray, co-owner of Memento Funeral Chapel in Bonnyville, Cold Lake, and St. Paul, it was the satisfaction of knowing that a job well done meant helping a family during a difficult time in their lives.

The Thackeray’s have been working in the funeral service industry for over 50 years, and in April, they were recognized by the Alberta Funeral Association for 50, 40, and 25 years of service.

It started with Jeff’s father Don, who at the age of 18 worked at a funeral home in Saskatchewan.

Over the course of 50 years, he continued his career in the industry in one way or another.

“I started when I was 18-years-old in Weyburn, SK. A friend of ours’ parents owned the business. Their son was my age and we had been friends for a long time. In those days, ambulance was part of the funeral home, so I got involved at the age of 18 helping out. When I graduated, I went into it full time,” Don explained. “I liked helping people and that’s what kept us interested in it.”

In 1975, Don and his wife Elda purchased their first funeral home in Bonnyville.

“Elda had no participation in funeral service up until then,” said Don.

But, much like her husband, Elda fell in love with helping families in need.

“It’s rewarding in the way that you’ve helped a family deal with their grief,” expressed Elda, who received 40 years recognition.

Less than 10 years after purchasing the business in Bonnyville, the family expanded the Memento Funeral Chapel name into Cold Lake, known as Grand Centre at the time.

“It’s grown over the years. We decided, Grand Centre had a funeral home at one time, but it closed because there wasn’t enough business in the area. We looked at it as a growing opportunity. We knew we needed to have another location. In 1986 we built a funeral home there,” described Don.

Before their son Jeff had decided on whether or not to get into the family business, Don and Elda took a short break.

Don explained, “Twenty-eight years ago I took a sabbatical and worked for another funeral home in British Columbia to see if I wanted to continue, because Jeff wasn’t involved at that time.”

It wasn’t long before Jeff and his wife Teresa felt the same pull to help others as Jeff’s parents once did.

“The community of St. Paul has been asking us since 2010. They only had one funeral home there and they wanted another option,” Jeff noted.

During the Alberta Funeral Assocaition Convention, Jeff accepted a plaque for 25 years of service in the funeral industry.

Even though Don and Elda no longer own the funeral chapel, they remain steadily involved in its daily operations.

“We still, even though we’re not involved in it, we want to make sure that the business excels and serves the people to the best of their ability. We’re very proud of both of them,” Don said.

Growing up, Jeff remembers his father often leaving during hockey games, birthday parties, or other family functions in order to respond to a tragedy.

At the time, Jeff admits he didn’t realize the impact his father’s work was having.

“I saw all of the bad stuff like my parents leaving in the middle of the night or my birthday party because someone passed away,” he said.

This was why he hadn’t shown much interest in the family business, until he grew up and saw the real reason his parents just couldn’t quit.

“When I was young, I saw the bad parts of the business, later on I learned to see all of the good parts,” expressed Jeff.

The family is first to admit the funeral business “isn’t for everyone.”

Don said, “It’s like every occupation, there are good days and there are bad days. You hope that you can be in a good mood all of the time.”