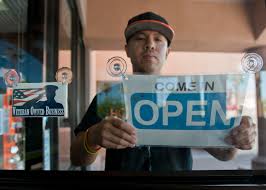 Frequenting veteran-owned businesses is a great way to show support for returning service members and their families. But it’s not always easy to know whether a business – big or small – is veteran owned or operated. There certainly are a lot of them: The National Veteran-Owned Business Association (NaVOBA) estimates there are 3 million veteran-owned businesses.

In an interview with Federal News Radio, Chris Hale, founder and president of NaVOBA describes the skills and characteristics veterans and service members bring to the workplace:

“These also happen to be many of the same attributes that are required of entrepreneurs and business owners,” he says. “That’s why veterans tend to go out and start businesses at twice the rate…of non-veterans.”

Many major companies you interact with on a regular basis are headed by former members of the U.S. military. As Daymond John, FUBU founder and “Shark Tank” investor says in an interview with Yahoo! Finance, “these are selfless people that go out and protect us…They know how to accomplish a task, …so I think that they are excellent CEOs.” Among many others, here are some companies you know that were founded by veterans:

Veteran-Owned Companies in Your Area

Many smaller and locally-owned businesses are also run by veterans. Visit buyveteran.com to support businesses in your city or state. Registering with NaVOBA, which runs the directory, also provides members with badges for store windows, business cards and other promotional materials to make their veteran connection more visible.